The last part of the Testing Tuesday’s “Test Pistols Tour” was a workshop about testing techniques. The original plan was to have a list of techniques and then exercise to learn those techniques. The scheduling caused us to change our approach because we had no time to create environments for exercises.

So, I turned to the community. 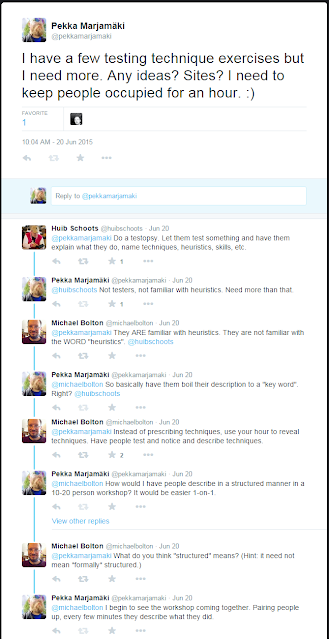 When I dragged my but to the conference room I was expecting just a handful of people, 3 or 4, but eventually we had 7 people. I think there was a bit of a tour fatigue in the air, since this was the seventh workshop. I had seven brave soldiers at the meeting room.

Now the plan was the following: Pair people up, make them test something and describe their testing. Then discuss what kind of a problem they were trying to solve with their chosen approach. Sounds simple enough. I was a bit uncertain if people could describe their testing to a level from which I could derive a technique. The challenge was thrown.

I told them to open Word. The assignment was to test the “Find and replace” functionality and describe to you pair what you did and why. I asked some questions from the teams during the 10 minutes of testing we did and made them focus on actually telling why they chose to do something. After the ten minutes, we started talking about how the testing was done. These are the key points we came up.

The first team started to describe what they did by explaining how they searched for the functionality. They were trying to find different ways to access the functionality. They found out that on different operating systems the hot keys vary. More so, the hot keys are customizable thus enabling different combinations. “Ctrl+F” was the easiest way to find the function, because it happens to be the same on many other software also (comparable product and familiarity to user). On Mac there wasn’t a “Ctrl+F” so the hot key was a bit difficult to find.

Based on their approach to using the hot keys we gathered that the technique can be used on many Windows based software (and why not Mac based, but I don’t have the experience to use hot keys quite yet). The commonly known hot keys like “Ctrl+C / V / X / Z“ etc. are quite easy to test. The tests are quick and cheap, very generic thus making the technique quite useful.

We started to think if we could apply it to various other solutions and products, and we came up with “premise variance testing”. When one changes the premise condition to a function, there might be changes in the behavior. This kind of technique can be derived also into a “step variance testing” where you mutate a single or many elements within the process.

When one team was trying to figure out how the function worked, they pulled up the manual. The help can be quite simple for experienced user but it acts as an oracle on many occasions. During help testing one can testing the help itself against the product and test the product against the help. In either case, one acts as the test object and the other as the oracle.

This technique could be derived into all kinds of oracle material testing. We can test against oracles that are used by various stakeholders, e.g. requirements or design documentation. We test the product and ask “is this ok?” and we then try to solve the problem by referring to the oracle. We might have an oracle (e.g. human oracle telling how it should work) and then test the other oracle based on the new knowledge (the human oracle disputes the written document). The “Help testing” might become “Oracle testing”, but the name doesn’t give me good vibes. ;) A help could actually be any material that helps us do testing.

A team was testing replacing a word with gibberish and then replacing that back to the original value (“Pekka” -> “ASDFGH” -> “Pekka”) and they wanted to know if the same amount of entries are changed. So basically the idea was to revert the original data without actually reverting the state. Mathematically I think this is called “inverse function”. First we apply the normal function followed by the inverse function. Roundtrip actually means that you return to where you started from. 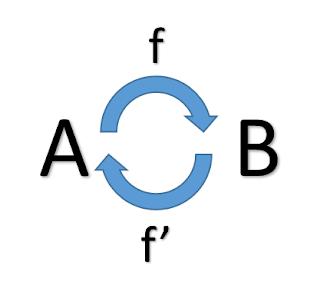 We had a discussion if the “roundtrip testing” is actually a generic thing that can be done to a state also. It is possible to revert the system to previous state without any information whatsoever about the state that was visited. This might actually be a problem in itself, but we chose to narrow our testing technique to mere data.

We did find some testing ideas while describing techniques and I think this was worth mentioning. A team wanted to test with as little data as possible. That is a one variable of premise variance testing where we solely focus on varying the data instead of the states. This testing can be the defaults form testing, testing without any inputs (NULL, n/a, whitespaces, etc.), removing metadata, etc. and it can find bugs in the exception handling logic.


All in all, the testing techniques we found have already been described in other sources, but these made sense to us and felt important. The terms are more tangible than “product tours” or some techniques found in books. We defined the terms and we learned how to describe them in a language that suits our context.

I know that at least the premise variance testing stuck. I have used it a few times now to describe what I do. It makes sense to repeat this exercise again with a different depth. Then uncover new, undescribed techniques and make them part of our tool box. After there has been a handful of these sessions, we might have enough skills to describe our testing to any stakeholder in a language we share and understand.

Sadly that was the last of the Testing Tuesday workshops on this tour. There will be another tour in Helsinki, and I shall write up as much as possible from those sessions.

Posted by Pekka Marjamäki at 10:17